Stay updated with all the latest happenings at Techjoomla. From news about the developments in your favourite extensions to Tips & Tricks about the Joomla CMS, Framework & Development.
Font size: + –
Print
1 minute reading time (276 words)

In the process of making Shika's user dashboard more user friendly we have made some major changes by adding new widgets to the dashboard. With this you can now build your own widgets and give your users the freedom to choose which widgets he/ she wants to be shown on the dashboard.

We have created a new table #__tjlms_dashboard which contains all the widgets per users. If the users has not set any widgets to be shown or is using the default dashboard, basic dashboard plugins will be shown.

For Shika 1.0, user will not be able to select the widget and hence only the basic widget will be shown. This feature will be implemented in version 1.1.

Here is how it works!

You will need to create a plugin of type tjlmsdashboard

Have a look at the basic structure.

For Shika version 1.0 you will need a hardcoded entry in #__tjlms_dashboard. After Shika 1.1 is released this won't be needed.

Now you can create your own widget to be shown on Shika user dashboard by simply enabling the plugins.

Have a look at this sample:

This is how the dashboard will look on above Database entries. 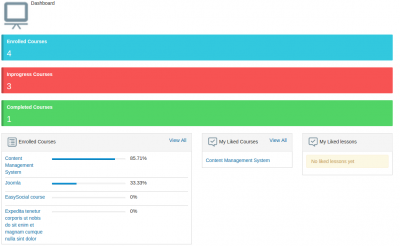 Following will be the result.

This is how you can completely revamp your dashboard and make it more user friendly. I hope this helped! :)

Note: This Blog is purely targeted towards developers!

Bubbly & full of life, Vaishali is passionate about giving her best in helping build the greatest of products.

More posts from author
Thursday, 11 February 2016 How to make a URL SEF when triggered from Joomla backend?
Friday, 17 July 2015 How to hide Help Menu in Joomla backend?
Thursday, 07 May 2015 People suggest v1.4.5 released

Celebrate Diwali with Techjoomla with flat 35% off on Shika, 20% off on all Techjoomla Products and flat 10% off on Bundles