Stay updated with all the latest happenings at Techjoomla. From news about the developments in your favourite extensions to Tips & Tricks about the Joomla CMS, Framework & Development.
Font size: + –
Print
2 minutes reading time (467 words) Admin has an access to the list of donors who have successfully donated for the various campaigns. Admin also gets to know the donor names, their email address and residential address, campaign name, phone numbers, amount and the date on which a particular donation was made for the campaign. He also gets to know the giveback that was chosen by the donor.

The Search tool allow the admin to filter the Donor list by various fields like :Donor name, email id 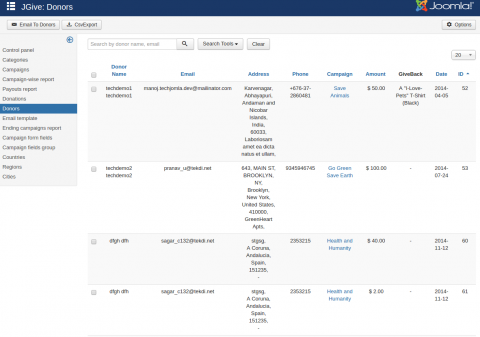 If any donor donating money to a campaign is somehow not able to complete his donation at that particular instance due to technical issues, then later on he can use the Complete donation option to complete his pending donation. 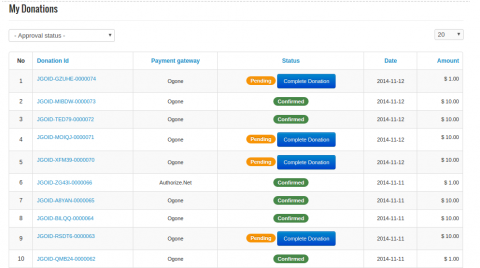 For the pending donation, donor can choose any of the given payments methods and accordingly a payment module is displayed to complete the payment.

#88398: At the front end of the site when campaign owner or site admin configured the campaign pin module then its effect was being shown on All Campaign Pin views or All Campaign Blog views.

#75521: When a user set filter in Front-end on All Campaign pin/ blog layout view its effect on campaign pin module.

#86915: At backend when admin donates to campaign from backend then give back is not shown increasing at the front end.

#88162: At backend when admin install JGive Package one category should be there.

#87343: At frontend or backend when the Campaign owner/admin is creating/editing while adding multiple images, wrong message is displayed.

#79548: At  frontend, in campaign creation form in promoter tab, city field label is not being displayed.

#87342: At the backend on donation view, when user clicks on the pop-up at the time of donation checkbox is displayed. Remove this check box.