Stay updated with all the latest happenings at Techjoomla. From news about the developments in your favourite extensions to Tips & Tricks about the Joomla CMS, Framework & Development.
Font size: + –
Print
4 minutes reading time (719 words)

Preview of jLike - Our awesome rewrite of jomLike - with Likes, Labels & Annotations !

After we aquired jomLike & jomGive from our friends at CorePHP last August, we had promissed both existing subscribers as well as our custommers of exciting & ground breaking changes & features to both the extensions. jGive a full rewrite of JomGive was released soon after to add tons of Features & native Joomla & CB support besides JomSocial. It has since become immensely popular with the community for any needs related to Donations & Investments.

And now, its time for a rewrite of jomLike !  We have revamped the entire code base to add some really awesome features & many many extension integrations. This Labs post will give you a walkthrough of what we have in store for you.

The name is changing to signify that our new Likes system will work with or without JomSocial. You will be able to extend it to practically any Joomla extension. It will do everything jomlike did & much more !

Likes & Dislikes or call it Favourites or Bookmarks !

jLike carries forward the Likes & Dislikes feature of jomLike. We have improved it quite a bit though. It much pretier with Bootstrap & the ability to use classes to change icons using classes & Font Awesome. You can rename the text & use jLike in any way you want.. As a likes dislikes system, Favourites or Bookmarks system !

Its so flexible that wehave one client using it with a Shopping cart as a wishlist !

People who Liked display with Avatars from Gravtar, JomSocial or CB 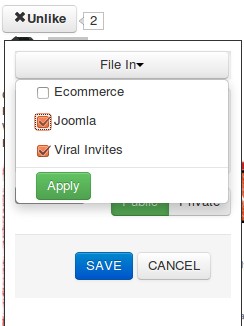 Turn on this feature & users will be able to add Labels or Tags to content. Labels can be set as public or private . Awesome way to manage stuff they like. 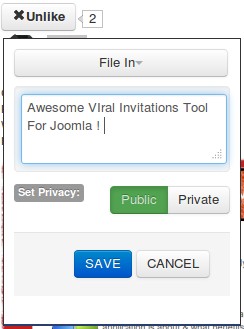 This feature will allow users to add a quick note against any link they like. This note or annotation can be private or you can set it to public & it will be more like a comment. This gets our implementation of Like much closer to Facebook & adds some more Zing on top !

All extra features can be switched on or off as per your requirement. Whether you want a Vanila likes system or a full featured one is completely under your control !

When we release, jLike will ship with 25+ inbuilt integrations for various extensions including all popular CCKs, Joomla Content, Popular Shops & Galleries & much more.

Easy to use Developer API to develop more integrations

If you find jLike doesnt yet support the extension you need OR you are a extension developer & want to add support for jLike, our simple API will let you integrate in as little as 5 lines of code ! The API Docs Are already out !

Join the jLike Integration Marathon & get your extension Integrated with Jlike today ! We plan to release jLike by March end & any 3PD integrations will get featured in our release newsletter. Plus they will also be featured on the integrations page. If  you want to code an integration for your extension, send us an email & we'll give you access to the private beta.

jLike is written in native Joomla MVC & has lots of inbuilt plugin triggers to let you override & extend as much as you would like to. Plus it comes with Native support for Joomla 2.5 & 3.0.

Hmm... Thats about it for now, that is !  When will it be released you say ?  Well it would be well justified to say that its just around the corner !