People Suggest helps you find people that you should connect with on a Social Network. Currently supporting Community Builder & JomSocial based networks, we show you people based on mutual friends, Profile content, contacts you’ve imported and many other factors. We are continuously improving our logic & adding new factors & algorithms to use more of the information available in a social network. 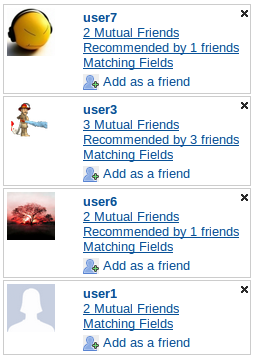 You as the site admin are able to configure if you want to use our automated priority based formula or chose to randomize or use of our specific logic algorithms to show suggestions. Since our formula is automatic, you might occasionally see people you don’t know or don’t want to be friends with. To remove them from view or ignore them, just click the X next to their names.

To create People suggest we have used all the experience gained about Demographic targeting in SocialAds as well as the logic systems from 2 of our most successful products Network Suggest & People You May Know & Mashed all that up with some awesome new features & algorithms to create a full fledged People Suggestions system.

Customers who have already used Network Suggest & People You May Know will find that we introduce a completely new feature ( A small product in itself) "Recommended Friends" in addition to several hidden logic algorithms to improve on the result quality.

People suggest uses several different logic algorithms either individually or in combination based on an intelligent priority based decision making system. Some of the base logic used are as follows. Please click on the items below to know more about how each system works.

Some of the Key features of People Suggest are as given below. Note that Each of the logic systems used is a sub product in itself & has its own set of features additional to the common ones for people suggest. To see those Click on the Links.

The priority of the logic modes in case of "Priority Decision System" is as follows:

In case of Random Decision System, these logic modes are randomized to get suggestions.