Stay updated with all the latest happenings at Techjoomla. From news about the developments in your favourite extensions to Tips & Tricks about the Joomla CMS, Framework & Development.
Font size: + –
Print
1 minute reading time (156 words) 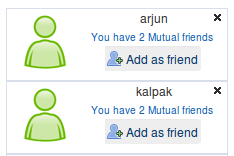 We have released version 1.3 of the CB & JomSocial Suggest Modules. V1.3 brings a completely Ajaxed CB Suggest module along with the Ignore feature that has been there for sometime in the JomSocial Versions. Now both Cb & JomSocial versions support a whole new Array of features

Users having an active subscription can download the update by logging in to their accounts. Not Have them ? get them at the links below.
CB Version | JomSocial Version

JBolo! v2.1.0 released
People you May Know from Facebook comes to Joomla,...