Stay updated with all the latest happenings at Techjoomla. From news about the developments in your favourite extensions to Tips & Tricks about the Joomla CMS, Framework & Development.
Font size: + –
Print
2 minutes reading time (490 words)

Broadcast for JomSocial in the Labs

For the past few weeks we have been working on a new Application that will make integrating you JomSocial community with the 3 Big Social networks viz. Facebook, Linked In & twitter much easier. A Big complaint from a lot of our customers is that very few users ever update their JomSocial Status. They prefer to udpate the status over at Twitter, Facebook or Linked In. When one of our customers came in looking for such a solution & another quickly followed, we decided to develop a product out of it.. 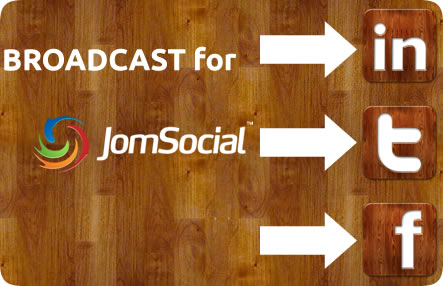 On taking end user feedback, we found that users hate to go to so many sites to update their status. They love the way facebook & twitter can integrate with each other - That is when you update twitter updates automatically.. What would be best from their perspective is to be able to Update their JomSocial status such that all the other networks get updated as well. If they could do that , they would spend more time on a JomSocial network. What would be even better is if the status from the other networks was synced with JomSocial as well...

After a few weeks of work, we have JomSocial Broadcast for you.. It does the first job.. that of connecting to the networks via OAuth & posting to all of them very well.. While the reverse sync process is still experimental. We take this opportunity to bring it before you & take your feedback before doing a public release.

Broadcast for JomSocial shall be a JomSocial Application / Module that will let any JomSocial user connect his Twitter, Facebook & Linked In ( more networks are planned later) Status updates from your JomSocial site itself right from the status update box.

It supports 2 kind of Updates

How does the user use it ?

Once all the networks he wants to link are linked up, he just has to update his status from the JomSocial status box & voila .. all connected networks are updated !

Let us know what you think !

Whats planned in the Future